Time to the Pestilence: 16 days

THE radio filtered the news of peace in the Holy Land through Samuel’s dreams.  The smell of ful madammas and grilled flatbread greeted Samuel’s blinking eyes and waking half smile.  His mother Dalia sang as she prepared breakfast: A little honeycomb and yogurt to celebrate the sweetness of peace; the bitterness of olives for the years of loss and suffering.

Bill Irons: What was Samuel like as a child?

Dalia Srour: He was a good boy, always reading but very quiet.  He was the youngest.  His two big brothers were strong and boisterous, so loud, shirking their chores, yearning for the world beyond our home.  With Samuel it was different; he looked after us, helped us, especially with the farm.  He would just quietly get on with the things that needed doing.  No fuss, no bother.  He was good with his hands. He would help fix up the barns, tend the animals, you know, do something helpful.

I knew out of my three boys he would be the one who stayed.  The others ran away to war or for love, but Samuel looked after me and when I got old, he looked after the farm.  Selflessness is in his nature.

Bill Irons: How did he do at school?

Dalia Srour: He was a popular boy.  He was a smart boy, the smartest of my sons but also the least interested in school work.  I never understood why he didn’t apply himself.  He loved his books but didn’t love school.  He wouldn’t study, do homework, or prepare for exams.  With all that reading, all that knowledge going into that brain of his you would have thought he would have done better, achieved more but it was the same thing in all his school reports; Samuel needs to stop dreaming.

Bill Irons: How did the loss of his brother affect him?

Dalia Srour: Every family in our village has lost someone in that war.  I expect that most families in the country have lost someone precious, someone loved.  So in that respect, Samuel’s pain, our pain was no different to anyone else’s.

Dalia Srour: Not at all.  My family going back a few generations on my mother’s side were originally Jewish and Samuel’s father was Christian but we as a family don’t observe either faith; I suppose we wear the cloak of religion very lightly.  I have left my children to choose their own paths.  My other boys had some interest, but Samuel had none.  You know, he read everything, history, art, fact, fiction, but for all his reading, all the hours with his nose in a book, I never saw him read a single religious book or text. Even after his brother passed, he didn’t lean on faith.

Bill Irons: Where were you when your farm was destroyed?

Dalia Srour: Thankfully, I was in Haifa.  With the war over I was visiting my grandchildren.  I saw the lightning in the sky, the same as everybody else.  Then we watched the news and found out that our farm, our home had been destroyed.  That airstrike left us destitute; we have nothing now.  At that time I had no idea what had happened to my son.

Bill Irons: What do you make of it?

Dalia Srour: It’s a miracle.  You know whatever happens, whatever he does, however he helps others, he is still my son and for that I am grateful.  I guess now I have to share him a little more.

Blurb: The little girl cupped her hands and whispered almost inaudibly into her father’s ear. “The Pestilence is coming. Everybody here is going to die.”

A mysterious electrical phenomenon rolls above the cities of the world. The lightning which comes from the east, shines as far as the west, turning night into day.

Two brothers of the lightning, Samuel Srour and Victor Pierre Chaput are gifted powers by the storm. Their paths intertwined, with enemies on all sides.

Samuel Srour has unwittingly started a revolution. His Healed walk the Earth. Free of injury, sickness and disease, but powerful forces stand in his way and the Pestilence is drawing ever closer.

About Faisal Ansari: Faisal Ansari has spent the majority of his adult life strapped into a suit writing marketing and stuffy legal documentation for M&A transactions in the City.

Despite growing up in London, Faisal’s overwhelming preference is to be outdoors. When trapped indoors he reads until his eyes bleed.

The Pestilence is his first novel. 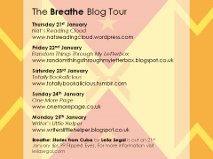 Hi all, today I am excited to be  kicking off the blog tour for Leila Segal: Breathe – Stories from Cuba on my blog today  Leila writes about What inspired her to write Breathe.

You can purchase breathe here http://www.amazon.co.uk/Breathe-Stories-Cuba-Leila-Segal/dp/0954157052

As soon as I set foot in Havana, I felt a passion for the place. I walked down the main street and came to a food stand – the woman was holding a baby, she was looking straight at me in a way that made my stomach jump. I felt alive. I wanted to stay.

For the first six weeks I rented a room. The feeling of sweet breeze on my face in the morning – that’s in Sabbatical, one of the stories. The room inspired that story – though the characters are not me, or the people I knew: they’re bits of people, bits of story, bits of thoughts, all bound up into new creations.

It’s the sun – the heat – they melt your bones, your mind, your heart. Words flowed out of me like sweat from the skin – it was hard to stop them. I went diving in the far West of the island: fish beneath the water – multi-coloured tropical fish, lace on the seabed, sun in your eye like a day-long flash… All that became the title story Breathe.

I fell in love. Falling in love with a man from another culture wasn’t easy – not for me, not for him. I had so many new thoughts all the time – I was discovering that this man, a fisherman from a small Cuban town, and me, an urban Englishwoman: we were the same. I remember a fight, once – he’d been out all night with his cousin, and as we didn’t have a phone, I had no idea where he’d gone. When he finally came back, I saw that he was just as sensitive as me in the same way to the same things – I could hurt him, he could be angry, we could give each other love. My story The Party grew out of that.

I wanted to write about the country people. Foreigners have written books about sex and degradation in Havana, but I felt this did not do justice to the beautiful Cuba I knew.

The story I Never See Them Cry came from my difficulty with Latin family living – and the physical hardship of life there. You adapt – love is the first thing that makes you want to – but bits of you have to be smoothed out, knocked off in the process. These powerful emotional journeys inspired stories. I wrote in a small hut in the garden amid the pigs, dogs, chickens, peppers and avocado trees. The family kept asking me why I wanted to write so much, instead of sitting with them. It was my difference, though, that stimulated creativity – just as grit in an oyster makes a pearl.

I witnessed tourists doing awful things – as if there were no repercussions, like infants in a playschool grabbing cake. That’s where Luca’s Trip to Havana came from – the story about an Italian businessman who picks up a Cuban woman working in his hotel. Sex tourism was evident – you’d see gorgeous young Cubans with unattractive Europeans, staring into the distance whilst they sat at tables together, or being pawed. My idea was to show how people project their dreams onto the island, like a colouring book. It’s not just outlines, though; it’s full people.

I think that most writers feel like outsiders. I write to say the things I can’t speak aloud. Living in Cuba was the most extreme form of difference I’d yet experienced – but whether we’re in a foreign land, or have never left home, each of us is a different country – and we reach across difference to get close, which is what the characters in Breathe are trying to do.

About the author: Leila Segal was born in London, of Polish, Lithuanian and Romanian descent. When she was little, she started to write. In 2000 she visited Cuba – as soon as she arrived she knew that she wanted to stay. She lived first in Havana, then the rural far West. Breathe – Stories from Cuba is her debut collection, written during this time. Leila is director of Voice of Freedom, a project that works with women who have escaped trafficking. She reads her work regularly in London – find out more at www.leilasegal.com